At the same time, average advertised graduate salaries are up 10% year-on-year, reaching £24,402. 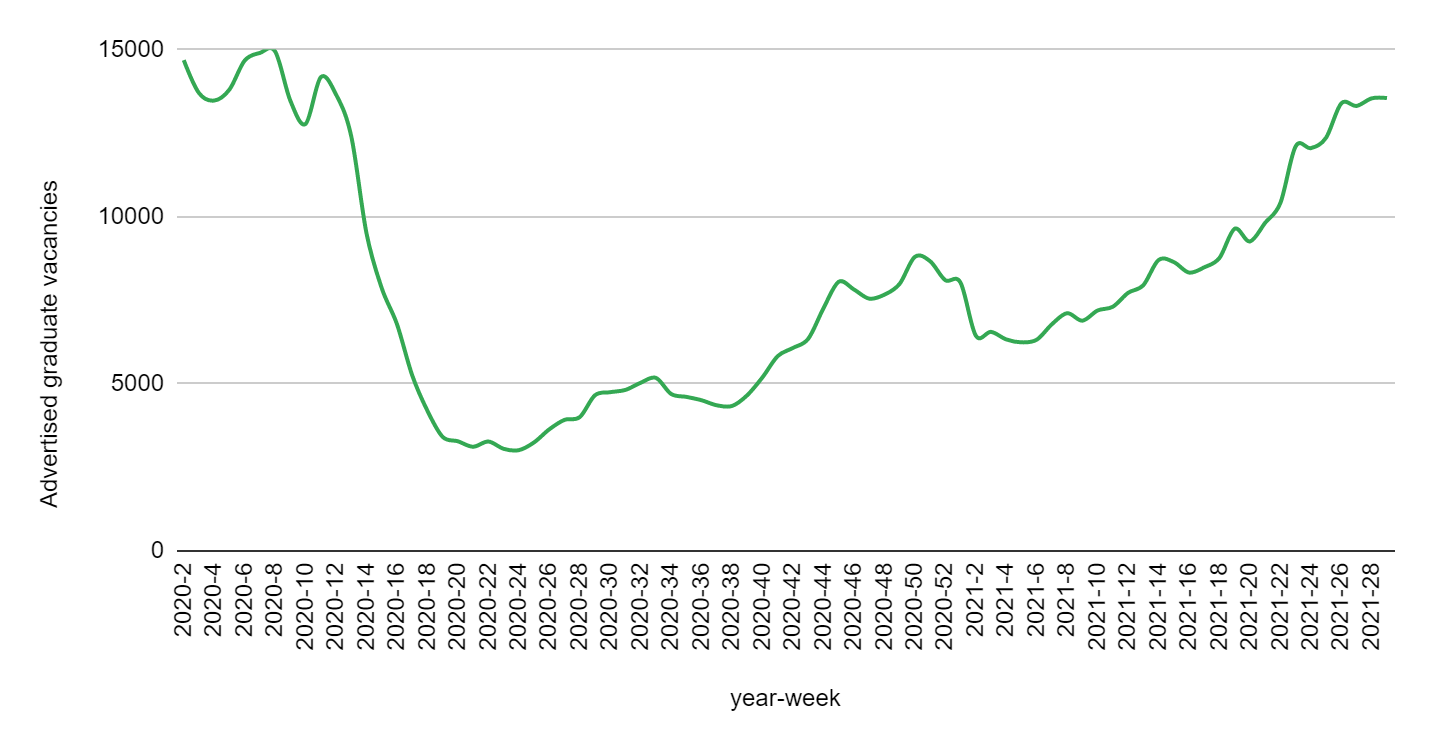 Despite the recent recovery, the graduate sector has been one of the slowest to recover from the pandemic, with employers falling back on hiring senior staff with proven skills over the last year rather than taking on entry-level staff. Graduate hiring remains -5% below the pre-pandemic levels seen at the start of 2020, when weekly graduate vacancies averaged 14,200 jobs. The only other sectors still experiencing depressed hiring volumes are Energy, Oil & Gas (-19%), Healthcare & Nursing (-8%) and Legal (-5%). The Travel sector is also still struggling, with just 221 openings on offer on Adzuna for Travel agents, just 33 vacancies available on cruise ships, and hiring for Cabin Crew all but on pause. This June saw British Airways put thousands of workers back on furlough as the airline continues to struggle with lower travel volumes, though Ryanair continues to hire for limited opportunities.

Graph 2: The recovery in graduate jobs compared to all jobs - by change in advertised vacancies compared to pre-pandemic levels (average of first 7 weeks of 2020) 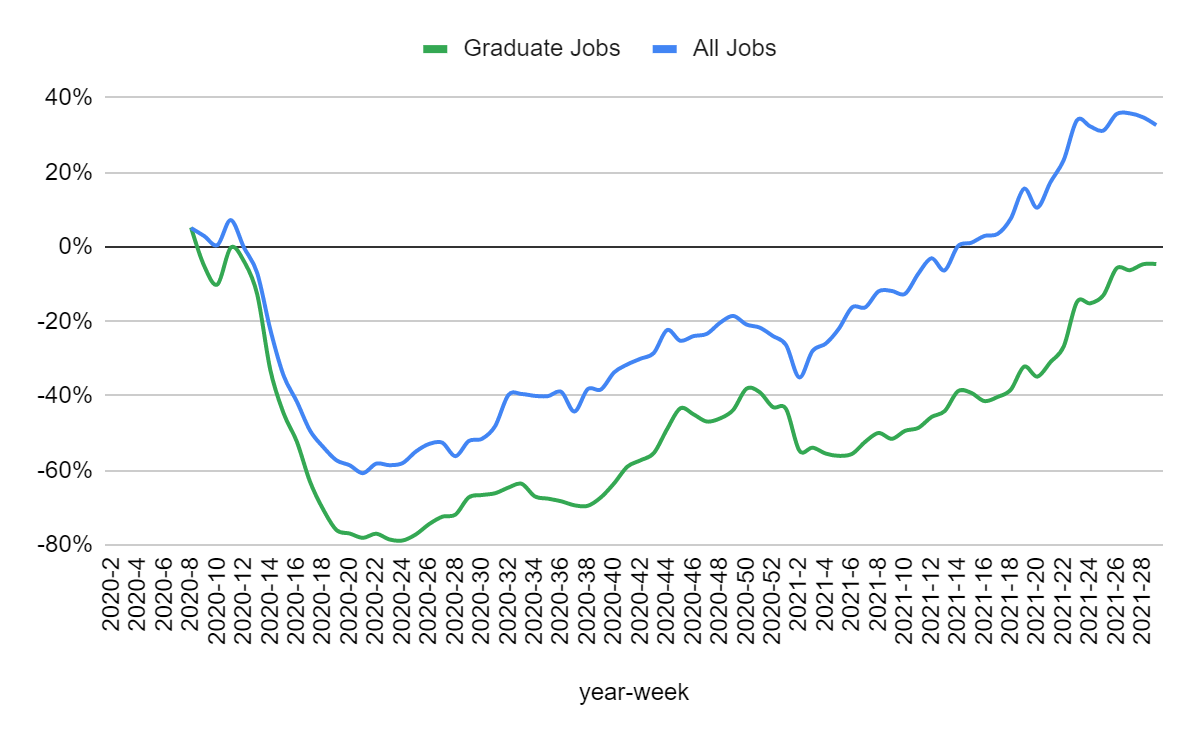 Despite recovering graduate job opportunities, it remains tough for the Class of 2021 to secure a role due to increased competition for jobs.

Alongside the thousands of grads looking for a job this summer, many who graduated in 2020 are still looking for employment. Data from the ONS show average unemployment among ‘recent grads’ (those graduating within the last 5 years) climbed to a peak of 12.0% in Q3 2020, with data for Q4 and beyond yet to be published.

On top of this, the transformation of the jobs market since the pandemic means the Class of 2021 may now be facing competition from remote grads, who could be based overseas.

With around 560,000 UK students set to graduate this year according to figures from UCAS, at least 40 graduates will be competing for every available opportunity. Factoring in additional competition from last year’s cohort, overseas students, and remote workers, the true figure is likely to be considerably higher.

Overall, searches on Adzuna for graduate roles have increased 353% year-on-year.

Andrew Hunter, co-founder of job search engine Adzuna, comments: "Graduate hiring was hard hit by the pandemic and has been slow to recover. Many employers simply stopped creating entry-level positions and focused hiring instead on senior leaders to help steer them through the pandemic storms, as well as filling urgent open roles. But things seem to be bouncing back just in time for the class of 2021, with our data showing 10 consecutive weeks of growth in graduate hiring and vacancies are finally returning to healthy levels.

“Despite the recent rebound, the class of 2021 may still have a tough time finding their first jobs. Last year’s caution has left a hangover. Many graduates from last year will be vying with this year’s cohort for open positions, leading to tough competition for openings. More generally, youth unemployment remains high - and could get higher still when furlough wraps up in September. But there is reason for optimism. Increased hiring at the graduate level signals growing confidence among UK companies and a desire to train up the next generation of talent. The economy may stomach one year’s pause on entry-level hiring, but we need to help our grads into employment to support long-term growth.”

Broadly, grad opportunities are more plentiful in sectors which have held up better to the pandemic, namely Logistics & Warehousing (where jobs are up +165% on pre-pandemic levels), Manufacturing (+132%), Trade & Construction (+88%), and IT (+34%). The Big Four also continue to hire for grads.

Andrew Hunter, co-founder of job search engine Adzuna, comments: "Grads looking for their first job may want to focus on growth areas of the jobs market. Since the start of the pandemic, sectors including Logistics & Warehousing, Construction, Manufacturing, and IT have all boomed. Focusing a job search in these sectors could be one way of maximising the chance to secure a great new role.”

London & South East home to half the opportunities

Adzuna data also reveals a clear regional disparity in opportunities. Nearly half (49%) of the graduate jobs on offer are clustered in London and the South East, accounting for 6,676 of the 13,543 available. The North West also offers over a thousand positions (1,425).

By comparison, grads searching for employment in Northern Ireland, Wales and the North East have a harder challenge, with fewer than 300 openings on offer in each region.

Table 2: Advertised graduate vacancies and what they pay -- by region

Sector News
As a manager, you will understand the importance of recruiting and mai

Sector News
Growing up in rural Gloucestershire, Tiegan Bingham-Roberts had the od

Sector News
Learning a language has so many benefits. Whether it’s learning abou

FE News: The Future of Education News Channel shared a video in channel. 10 hours 59 minutes ago 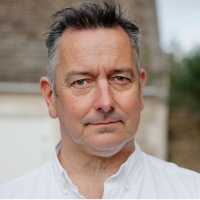