by NPTC Group of Colleges

Local students from Newtown and Brecon Colleges came together with learners from across NPTC Group of Colleges to celebrate their shared success surrounded by friends and family at a Graduation ceremony held at Swansea University’s Great Hall.

As well as offering traditional post-16 A Level and vocational courses, the College is a key provider of adult education and delivers a wide variety of Higher National Diplomas, Higher National Certificates, Foundation Degrees and Degree courses, in partnership with, and as a fully accredited member of the University of South Wales, Trinity Saint David, Glyndŵr University and Swansea University.

Among those receiving their certificates of graduation, Pillars of the local community were also awarded Honorary Fellowships at the ceremony.

This year prestigious Honorary Fellowships were awarded to Assembly Member Gwenda Thomas, Pat Vine, Governor to NPTC Group of Colleges and Justice of the Peace, and High Court Judge Sir Clive Lewis. All were awarded the prestigious honour for Service to the Community.

Students from Newtown College who graduated included Lisa Andrews and Tracey Fletcher who achieved the Professional Graduate Certificate in Education (PGCE) along with Peter Davey who was not present at the ceremony.

Students from Brecon College who graduated included Skaiste Kazlauskiene and Michelle Dorrise-Turrall who both received 1st class honours Degrees from our Business Management, an IT Glyndwr programme. Rhian Joshua (who was unable to attend the ceremony), Charlie Jones and Levi Phillips who achieved a HND in Sport Coaching and Development. 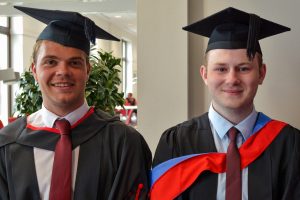 PGCE Lecturer Tony Burgoyne said ‘It was great to see the ladies graduate today knowing how hard they have worked alongside juggling busy lives’.

Skaiste Kazlauskeine, has already gained employment with Tai Calon Housing Association as a Trainee Systems Analyst with the Blaenau Gwent based company.  Tai Calon  are one of the biggest housing associations in the country, looking after Ebbw Vale, Tredegar, Brynmawr, Abertillery and the other parts of Blaenau Gwent housing stock.  A fantastic step for Skaiste’s career in Business.

Michelle, a mum of two young children, was intially worried she had bitten off more than she could chew when she signed up for a BA Hons Buiness Management and Information Technology degree but now graduates at the highest level of the course with a first class honours. Despite not coming from a business background Michelle thrived on the course and quickly grasped the complex concept involved in the dual  aspects of Business management and Information technology .

Rob Flower, Business lecturer and HE Lead at Brecon Beacons College, attended the ceremony along with Lecturer Mike Hughes.  Rob introduced the Award on stage for the Department and later said how delighted he was for Skaiste and Michelle commenting “We are all so proud of both the girls who have put in so much work and fully deserve their first class honours.  I have no doubt both girls have excellent Careers ahead of them”

Rhian Davies, Lecturer in Sport, provided the address on stage for the HND in Sport Coaching & Development.  She said “We have had so much fun coaching Charlie, Rhian and Levi to achieve their qualifications.  I know they will go on to be great ambassadors for Sport and wish them the best of luck in the next stage of their careers.”

FE Video
The Principles of Public Life: 25 yearsOn the 25th anniversary of the

FE Video
‘I bet your parents weren’t very pleased!’‘What did your mum s

FE Video
To mark the start of #NationalApprenticeshipWeek, @AXAInsurance is pub