Set against an increasing Climate Crisis facing the world, the Green Gown Awards put a spotlight on the innovative and inspiring sustainability work taking place in universities and colleges to create a brighter future for their students. Northumbria’s Student Law Office won in the “Benefiting Society” category - recognising the powerful and innovative ways education institutions are realising their purpose to benefit the lives of individuals, communities and wider society.

The judges described Northumbria’s entry as great example of what a university can achieve for social cohesion in the local community. They said the project has “transformational impact on those involved. It’s impressive to achieve so much with so little resource. Clearly measurable impact on students’ employability”.

Northumbria is acknowledged as having one of the most active and pioneering student law offices, where law students undertake free legal work on behalf of real clients. In the past 10 years, students have represented more than 2,500 clients recovering over £1.5 million.

“Winning a Green Gown Award is a superb achievement for the whole team involved with the Student Law Office. I believe it is also recognition of the contribution Northumbria makes to the values and benefits of clinical legal education – both for our students and for the clients they serve. Being part of our Student Law Office enriches the learning experience and career prospects of our students and provides access to justice for many vulnerable clients in need - those who would otherwise have nowhere else to turn for help.”

Professor John Wilson, Pro Vice-Chancellor for the Faculty of Business and Law at Northumbria, added: “I’m delighted that the Student Law Office has won a Green Gown Award. As well as providing law students with hands on legal practice experience, the SLO offers pro bono legal advice and representation to the public and demonstrates our commitment to the Sustainable Development Goals, including justice for all.”

“Now in its 15th year, the Green Gown Awards celebrate the very pinnacle of best practice in a sector that is well ahead of the curve on the sustainability agenda. The submissions this year were of an incredibly high calibre, tackling a huge array of sustainable development areas. It was a hard process to pick the winners, and it involved over 90 national and international judges.”

The recognition in the Green Gown Awards marks another achievement in a very successful year in sustainability at Northumbria. The University was named the fourth most sustainable University in the UK in the People & Planet League earlier in the year and hit the ambitious carbon reduction target set in 2010 a year early.

Northumbria has an ongoing commitment to supporting the United Nations’ Sustainable Development Goals.

The Green Gown Awards UK and Ireland are administered by the EAUC – The Alliance for Sustainability Leadership in Education and are governed by a cross agency steering group or organisations in the sector. 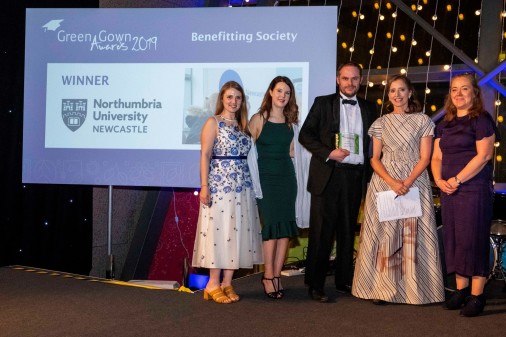 FE Video
Back in July 2019, the College of Haringey, Enfield and North East Lon

FE Video
Jess Fisher and Robert Fletcher were welcomed, alongside Digit Music a

Stephen Kellie has published a new article: Trade Roles: The Need for Diversity and Equality 5 hours 22 minutes ago

A provider’s Designated Safeguarding Lead (DSL) plays a critical role in its approach to safeguarding its learners, training its staff, providing...