Home » Skills and apprenticeships » In Whose Interest? Forced academisation is a blunt instrument

GLOBAL JUSTICE NOW AND NATIONAL EDUCATION UNION LAUNCH NEW REPORT ‘IN WHOSE INTEREST? THE UK’S ROLE IN PRIVATISING EDUCATION AROUND THE WORLD’

The report, titled In Whose Interest? The UK’s role in privatising education around the world, lays out the UK Department for International Development’s policies and programmes that are contributing to a privatisation agenda.

In Whose Interest? highlights how Official Development Assistance (ODA) has been supporting privatisation through grants to education businesses, support for pro-private research, and consultancy contracts with UK-based businesses, among other methods.

The latter includes the Girls’ Education Challenge (II), which alone will see a £32.7 million consultancy fee paid to PWC.

In Whose Interest? also illustrates how privatisation is problematic in terms of equality, quality, and accountability in education, and how it is undermining public education systems.

Fees, non-inclusive providers who don’t provide for children with additional needs, and unqualified teachers all contribute to a poorer and less equal learning experience for children relying on low-fee private schools.

Other systems, such as the proposed Education Outcomes Fund, could enable profit-making (through interest paid to investors) in education financing.

While DFID Ministers have claimed on several occasions that over 95% of the UK’s spending on education goes to the public sector, DFID’s response to a Parliamentary Question in early 2019 indicated that this figure “includes for-profit organisations who deliver services through the public education system.”

DFID also stated that this figure represented “a one-off exercise” in 2016/17 that gave “a snapshot of the education portfolio at the time” based on a methodology that would be “too costly” to repeat. Given this, the 95% figure adds little to DFID’s position.

Importantly, In Whose Interest? makes parallels between DFID’s work internationally and the academisation programme in England.

Both internationally and in England, accountability has been problematised through privatisation of education.

In England, academies have found ways to circumvent the Government’s no-profit policy through so-called “related-party transactions”, where an academy enters into a commercial relationship with an organisation that is related through common directors or family members.

A total of £134m was paid out by academy trusts on related-party transactions in 2017-18, up from £122m in 2015-16. This is just one of the many issues related to academisation in England that is mirrored in privatising education internationally.

The UK is one of the biggest funders to international education globally and continues to deliver on the 0.7% GNI commitment made in 2015. In Whose Interest? recommends that this welcome funding for global education is fully supportive of public education systems.

“Education is a human right and a public good. The Government’s blatant privatisation of education domestically and internationally is commercialising this right and favouring profits over pupils. It’s time that the Government, including the Department for International Development and the Department for Education, recognises that their ideological push for privatisation isn’t delivering the quality, inclusive, and free education all children and young people deserve.”

“It is shocking that the UK aid budget is being used to fuel the profits of corporate education providers around the world, rather than boost the public systems which get the best results for children. It is not just a minor portion of our aid spending on education, it is a significant share – and it is disturbing that the Government seems uninterested in even monitoring it accurately. Ministers must stop seeing the aid budget as an inconvenient promise to be diverted towards big business, and start seeing it as a means to tackle the continuing scandal of global poverty. That means putting pupils before profit.”

Global Justice Now campaigns for a world where resources are controlled by the many, not the few. We champion social movements and propose democratic alternatives to corporate power. Our activists and groups in towns and cities around the UK work in solidarity with those at the sharp end of poverty and injustice.

End of Privatisation of Education

“After nine years of the academy programme, there is still no evidence to suggest that turning a school into an academy raises standards of education or brings any benefit whatsoever.

“On the contrary, we do have ample evidence to demonstrate that academisation leads to a loss of autonomy for schools, a reduced voice for parents and local governors, the loss of accountability to communities and local authorities, a more opaque admissions system, higher rates of exclusions, profiteering from some academy trust directors, fat cat salaries for some academy chief executives, higher costs for taxpayers and serious distress and disruption for children and young people and their families when an academy trust collapses, as many have done.

“Forced academisation is a blunt instrument that has frequently hampered the school improvement journey of schools facing specific challenges. Where schools have remained with their local authority, evidence shows they have been able to recover more quickly and deliver the high-quality education we want for all children and young people. No school should be forcibly academised against the wishes of its parents, governors, staff and pupils and the NEU will stand side by side with those opposing such a move.

“The NEU will continue to campaign for the end of academisation of schools – whether ‘voluntary’ or ‘forced’ and for all academies to be brought back within the oversight of democratically elected local authorities. We believe that is the only way to ensure that England can once again secure the world class education system our children and young people deserve.”

The Nigeria Union of Teachers has reaffirmed its commitment to lead the advocacy against commercialisation and privatisation of education in the country. EI workshop The…

Reacting to a recently published study, education unions have stressed that authorities of New South Wales must guarantee minimum public funding levels for technical and… 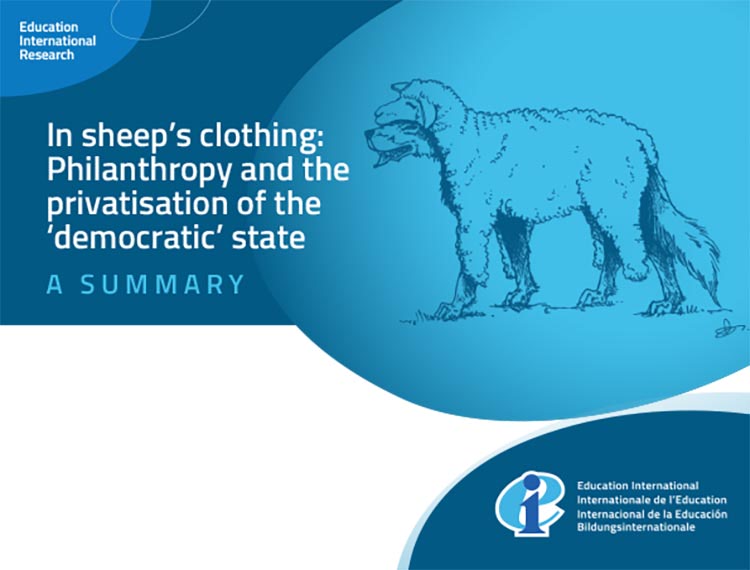 Philanthropy and the privatisation of the democratic state: who needs a Ministry of Education? A report to be launched today (20 Mar) by Education International…

On the occasion of the signature of the European Union-Japan Economic Partnership Agreement, Education International firmly supports its European and Japanese members, reasserting that education…