Indeed - 5 Years After Brexit, job searches from EU workers are down 45% compared with 2016

@IndeedUK - Five years on from the Brexit referendum, searches from EU workers are down 45% compared with 2016

London, 17 June 2021 - Interest from non-EU workers in low-paid UK jobs is failing to make up for a 41% decline in interest from European workers since 2019, with jobs in food, hospitality, childcare and retail particularly affected1, according to new research by the world’s largest job site Indeed.

To mark the five-year anniversary of the Brexit referendum, Indeed analysed searches made on its platform for UK jobs by workers based overseas, both in the EU and beyond.

The declining interest in British jobs among EU-based workers cannot be attributed solely to the pandemic. Although interest in UK jobs from all foreign workers fell during 2020, searches from outside the EU have since rebounded nearly to pre-pandemic levels, while interest from the EU has continued to fall - especially in lower-paid jobs which are most affected by post-Brexit immigration rules.

Searches for UK jobs from EU workers are now down 36% compared to 2019 (and 45% down since 2016, the year of the referendum). The declining interest from the EU, coming as interest from the rest of the world is rising, may be attributed to the ending of freedom of movement for EU citizens at the beginning of 2021.

The UK government’s new immigration regime aims to prioritise ‘those with the highest skills’, but in practice it is also making it harder to recruit foreign workers for most lower-paid jobs.

Interest from workers outside the EU is largely stable, and even rising in the case of higher-paid roles, driven largely by jobseekers from Commonwealth countries and Hong Kong.

Interest is also stable from jobseekers in Ireland. Though part of the EU, Irish citizens can still freely live and work in the UK due to the Common Travel Area agreement between the two countries.

Share of searches in UK jobs from EU, non-EU and Irish workers 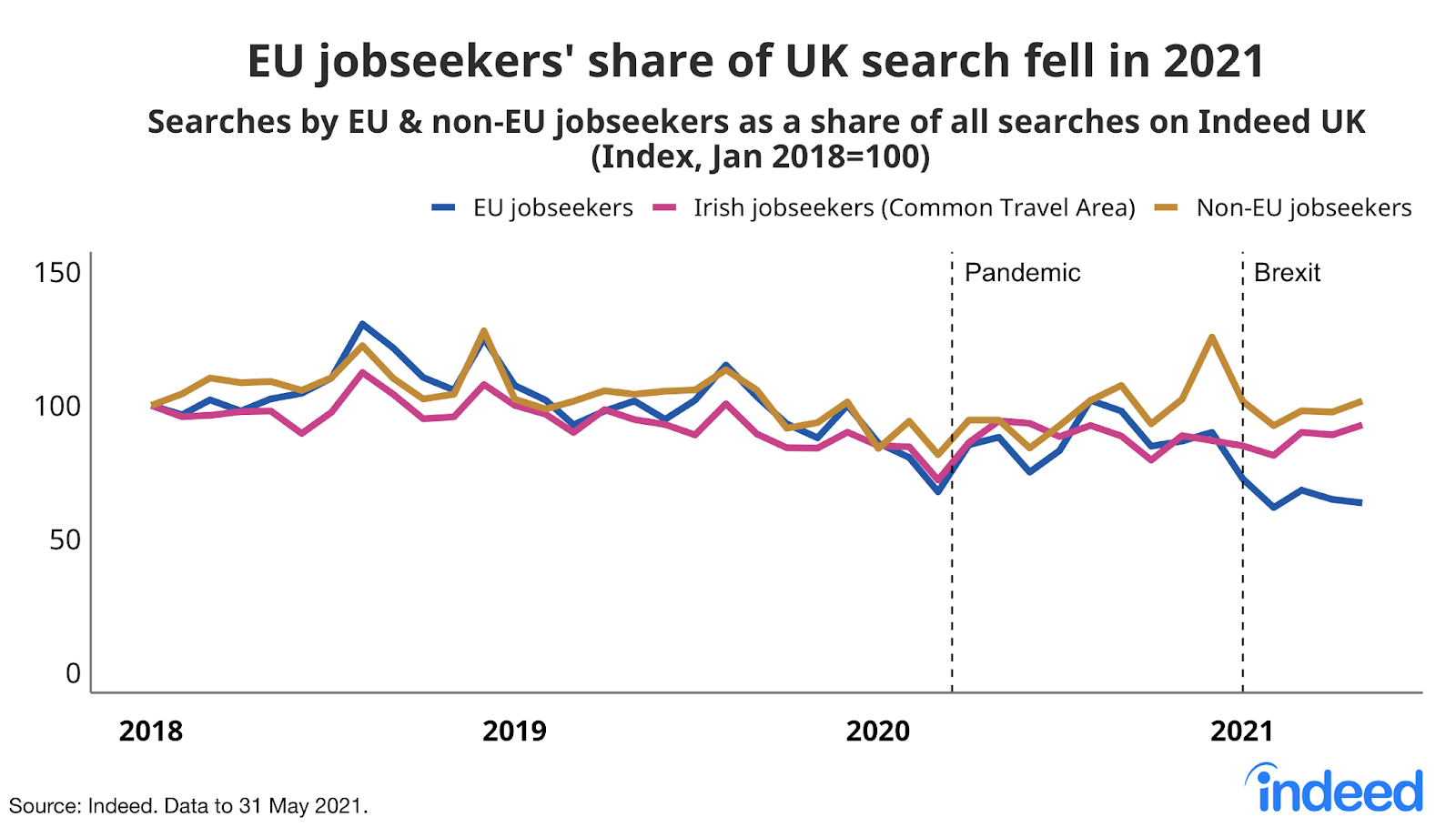 Indeed’s analysis shows that as the UK economy reopens and job postings grow, employers seeking to fill high paid jobs may be able to replace EU candidates with workers from the rest of the world, but those hoping to hire from overseas for lower paid positions may face additional challenges.

However, falling EU interest at the lower-paid end of the labour market, including sectors such as cleaning, social care, food and hospitality and loading and stocking, has not been fully offset by non-EU workers, with demand for positions with lower salaries increasing only 12% among jobseekers in the rest of the world. There is a different story for higher paid jobs, such as in tech, finance, medicine and engineering, where clicks from non-EU workers on UK jobs have increased by 39% since 2019.

Software developer roles see the highest share of clicks come from foreign candidates out of all UK vacancies, and interest has risen substantially since 2019, driven largely by non-EU workers.

EU interest has declined in all of those professions, but clicks from the rest of the world have crept up.

The fastest rising interest in UK jobs is from India, followed by jobseekers in Hong Kong, Nigeria, Pakistan and Ireland.

People in different countries are clicking on a wide variety of different job titles, however. Jobseekers from India and Pakistan are clicking most on software development jobs, Nigerian workers click most on nursing roles and administrative support is the most popular job among people from Ireland and Hong Kong.

At the same time, the steepest declines in interest in UK jobs are mostly in European countries. The US has seen the biggest fall in interest, potentially due to current travel restrictions, followed by Spain, France, Italy and Australia (which also has a travel ban).

“As the UK’s economy reopens and job postings rebound to pre-pandemic levels, two distinct pictures are emerging for employers looking to hire talent from abroad.

“On the one hand, employers offering higher salaries, particularly in sectors such as tech, science and engineering, may have no trouble replacing EU workers, as jobseekers from the rest of the world are showing a keen and increasing interest in those roles.

“But lower-paid roles are not receiving the same attention from foreign workers as they did only two years ago.

Sector News
An overwhelming percentage (75%) of CISOs consider their organisation

FE News: The Future of Education News Channel shared a video in channel. 19 hours 21 minutes ago

Educating yourself in Prison: an inside job

Educating yourself in Prison: an inside job

FE News: The Future of Education News Channel had a status update on Twitter 19 hours 21 minutes ago

RT @NCFE: ‘For as long as humans have worked, and whatever industry they may have worked in, success has always been predicated on having t…
View Original Tweet