Southampton City College has confirmed support from Abbey UK Corporate Banking to help get its £32 million facilities project off the ground.

Abbey will provide an £11.9 million loan, and the remainder of the project’s costs will be met by the Learning & Skills Council (LSC) and from the college’s cash reserves.

Nigel Tobitt, financial director, Southampton City College, says: "We approached Abbey during a period of considerable market uncertainty and were at once impressed by their enthusiasm for funding in the Education sector. The subsequent negotiation was totally consultative, reflecting a true desire to match our requirements and ensure the success of the project."

The project will see the construction of a new three-story student hub and two new buildings, as well as the refurbishment of existing buildings and facilities. Work on the site is already under way, and it is due for completion in April 2011.

Suzy Verma, director of the Education, Health & Communities unit at Abbey UK Corporate Banking, said: "This deal emphasizes our ambitions in the education sector. We are not simply transactional bankers – rather, we seek to establish long-term relationships with schools, colleges and universities in order to provide an array of tailored financial services through good times and bad. Southampton City College is a dynamic institution and we look forward to working with them."

Mr Tobitt added: "Abbey’s offer was very competitive and met all our bank funding requirements. In addition, advice received regarding hedging options and other ancillary factors was accurate, valuable and displayed an in-depth knowledge of the business, enabling rapid progress.

"Indeed, once we had accepted Abbey’s offer, the contract negotiation, signing and completion was achieved in only four weeks. We are very much looking forward to a long-term partnership with Abbey, and are confident in their commitment to Southampton City College and its aspirations."

The global financial downturn has been responsible for the collapse of many funding aspirations, and Mervyn King, Governor of the Bank of England, has recently…

The Learning and Skills Council (LSC) recently announced the lucky 13 colleges that would receive funding under the college capital funding project. In a statement,…

fforwm, the association of colleges in Wales, has welcomed the Welsh Assembly Government’s £2m capital funding for Further Education. However, the it also warns there…

Highbury College continues with Chartwells for campus catering Students at Highbury College, Portsmouth, will enjoy a wide range of eating options to rival the high… 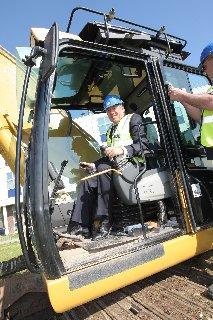 The Secretary of State for the Department of Innovation, Universities and Skills marked the start of Northampton College’s ambitious new capital building projects today when…