The Qualifications and Curriculum Authority (QCA) will abolish GSCE coursework for 10 subjects following an intensive review of subject assessment, it was announced today.

The changes, following a report released last November, include removing the coursework element from English Literature, History, Religious Studies and Economics, among others, to be replaced instead by “controlled assessments”. These will be introduced in 2009.

QCA Chief Executive Ken Boston said: “The current system of GCSE examinations and coursework is robust. QCA has provided both teachers and parents with further information on the help that they can provide and how best to authenticate a candidate’s coursework”.

“We have a responsibility to ensure that assessments in high stakes external examinations, such as GCSEs, continue to be valid and reliable. We are confident that the changes we are making to coursework will ensure that the GCSE remains fit for purpose, and ultimately reduces the assessment burden on both students and teachers”.

A research study conducted for the QCA has revealed that while overall, teachers” views on coursework were generally quite positive, there was a favourability towards coursework by those teachers whose subject required it as a component. Only 7% of teachers thought that students did not benefit from coursework, and for students, the drawbacks of coursework were three fold: that it is time consuming (36% felt this), that they have difficulty meeting deadlines (25%), and that it requires a lot of work compared to its weighting in the final GSCE mark (10%).

Interestingly, just over half of those teachers surveyed (51%) “strongly opposed” the coursework element being removed from their subject, while 31% felt that as a teacher, coursework was of “no benefit” to them.

Mr Boston added: “QCA will work with partner organisations and teachers to ensure that the new controlled assessment elements are rigorous and manageable”.

However, in a statement released today, Liberal Democrat Shadow Education Secretary Sarah Teather said: “Independent research and essay writing, which is what coursework requires when done properly, calls for self-discipline, organisation and concentration. Succeeding at both exams and coursework are important skills for young people to learn”.

Arguing that coursework allows for greater flexibility in the curriculum for both students and teachers, she continued: “Moving towards having more exams will not only disadvantage pupils who perform less well in an exam hall setting, but will be a lot more expensive and require many more examiners than we have right now”.

She added: “We need much more detail about how the new system will work in practice”. 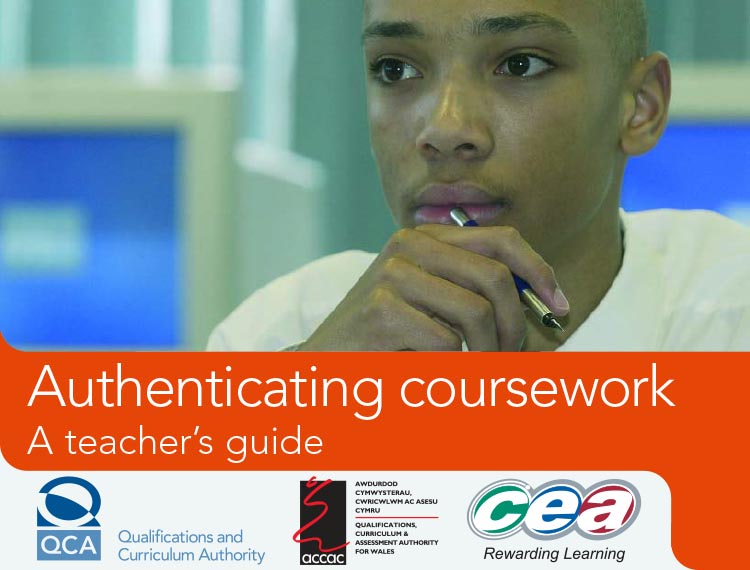 The Qualifications and Curriculum Authority (QCA) has recently published a guide on helping teachers ensure candidate’s coursework is authentic. It contains suggestions on how to…

A survey from YouGov’s Teacher Track system suggests 50% of teachers in England oppose the government’s plan to scrap GCSEs for a new baccalaureate system.…

The teaching of business education to 14-19 year olds needs to be more ‘hands-on’ if it is to engage and inspire young people, according to…

Comparing specifications from 5 subject areas, at GCSE and A level, with and without coursework to investigate how attainment differs dependent on student characteristics. Documents…