The latest UK unemployment figures have been drawing mixed reactions since they were published by the Office of National Statistics (ONS) yesterday.

This is less than the figure for the three months running up to January (974,000), but still represents more than 20% of young people.

And while male unemployment fell by 31,000 in the three months to the end of February, the number of jobless women rose by 14,000.

Responding to the figures, the National Union of Students (NUS) warned the government against alienating a generation of workers by reducing spending for education, training and job creation.

NUS President Aaron Porter said: “As youth unemployment hovers perilously close to the one million mark, opportunities for school, college and university leavers have become scarcer still and a generation is at risk of being alienated. Ministers have exacerbated the problem by reducing the life chances of young people and the schemes to support them at the time they desperately need access to education and training.

“This Government has shown a reckless disregard for young people and the combination of savage education funding cuts and fee increases mean many of those leaving education are at risk of being consigned to the scrap heap before they have even had a chance to begin their working lives.”

Carmen Watson, managing director of Pertemps Recruitment Partnership, said: “It’s re-assuring the employment figures fell this month, however youth unemployment still stands at 963,000 and this still remains a great concern. Given Britain’s aging population, it is important that young people are placed into work early on and employers should remain flexible and welcome them into the workplace through internships.

“It is important that these young people end up with long term sustainable employment otherwise we will see another sharp rise in unemployment figures in future months. Shor term employment is not the answer and only provides a short term solution.

“Youth employment still remains a grave concern and although the figures show a fall in unemployment this issue cannot be overlooked.”

However, the Chartered Institute of Personnel and Development (CIPD) said the ONS figures represent an overall brighter picture for the UK economy.

“The inflation rate is down, unemployment is down, and pay pressure is down. However, while the jobs figures are apparently signaling green for go, they reflect an improvement in the labour market at the turn of the year and don’t tell us anything much about about the road ahead.

“Indeed, the most up to date figures or vacancies and claimants of Jobseeker’s Allowance suggest that labour market conditions softened again in the early spring and it remains likely that unemployment will start to rise again later this year.

The number of young people out of work fell over the three-month period between September and November, according to the latest figures from the Office…

UK unemployment has hit a record high of 2.53 million, according to the latest Office of National Statistics (ONS) figures. The data shows the unemployment…

A much-needed, if small, dose of optimism was offered to the UK youths when the official government figures of unemployment were unveiled earlier this morning… 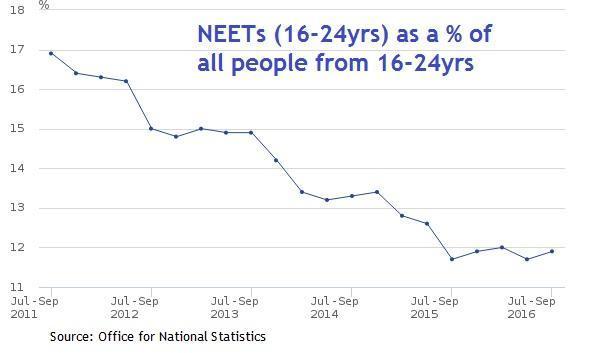 The Office for National Statistics has confirmed that employment continues to run at a near-record high rate of 74.5%, with 31.8 million people in work…