The Education Policy Institute (EPI) report published today (18 Apr) found that 50,000 pupils who took their GCSEs in 2017 were removed from the school roll without a clear reason. These pupils were neither officially excluded nor left the school for family reasons, such as moving house.

Of these children, 5,104 were off-rolled in the autumn term of Year 11: the last opportunity to remove children before their GCSE results count towards the school’s place in league tables.

The pupils most likely to be off-rolled are those with a history of persistent school absences, children in care, pupils who have been excluded from a previous school and children with behavioural, social or emotional difficulties or severe mental ill health.

“This is yet more worrying evidence that the Conservatives’ high-stakes testing culture is letting down our most vulnerable children.

“The desperate drive to secure a better Ofsted grade or climb up the league tables has given schools a perverse incentive to push children they regard as difficult on to other schools, alternative providers, or let them fall out of the education system entirely.

“No child deserves to have their future prospects torn apart because they’d make a bad statistic. Liberal Democrats demand better.

“Liberal Democrats would abolish Government-sanctioned league tables, replacing them with a broader range of data such as survey feedback and comments from other school leaders, so parents get a well-rounded view of a school.”

“No headteacher goes into the job to remove a pupil from school – and no headteacher takes the decision to do so lightly. Schools will typically have gone through a number of sanctions before exclusion is considered, taking into account the welfare of other pupils in the classroom.

“It is against the law to remove pupils on the basis of academic results – any school that does it is breaking the law.

“We have written to all schools to remind them of the rules on exclusions, and Edward Timpson is currently reviewing how schools use them and why some groups of children are more likely to be excluded from school than others.”

Time to end ‘teaching to the test’ culture. Liberal Democrat Education Spokesperson Layla Moran used a speech at the National Education Union to demand an…

In the Policy Paper, Every Child Empowered (March 2018), Liberal Democrats announced they would campaign for a widescale package of education reforms, including abolishing Key… 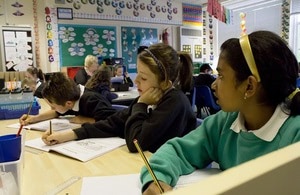 New research for Ofsted finds that a quarter of teachers have seen off-rolling happen in their schools. Teachers want to see more support for parents…

Following Boris Johnson’s announcement on Ofsted on Ofsted, analysis by the Liberal Democrats reveals that the Conservatives have let over 1,000 schools go unvisited by inspectors for over…