The most common forms of bullying in the workplace reported were:

These align closely with the government’s definitions of bullying in the workplace.

When broken down into demographics, the figures show a general decrease in the likelihood of bullying as age increases – with only 23% of 45-54 year olds saying they have experienced bullying, compared with 44% of 21-24 year olds. In addition, 40% of female respondents said they had been bullied, compared with 31% of male respondents. 67% of employees at director level had been bullied, making them the most likely category to be targeted. 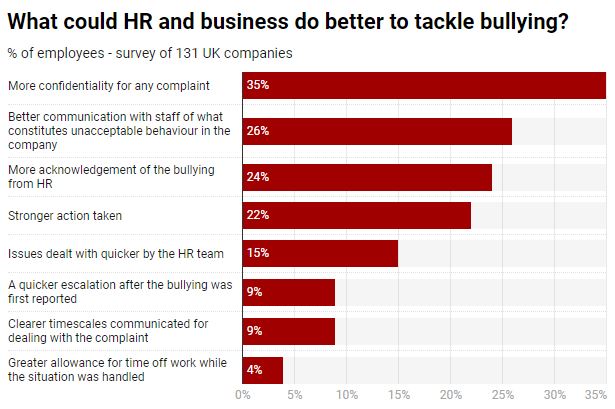 Of those who had been bullied, 60% were bullied to the extent that their productivity was affected, they took time off work, or they even left the company. 13% resigned altogether, while 28% took leave, and 15% took unpaid leave, as a result of the bullying. This shows not only that bullying seriously impacts an individual’s ability to do their job, and in turn affects the productivity of the wider business, but that companies are not doing enough to keep bullied employees in the office, in either the short or long term.

The need for some HR departments to improve how they handle cases of workplace bullying is also highlighted by the survey. 22% of respondents said the bullying was not dealt with despite raising it with HR, and only 11% of respondents felt that the situation then improved after doing so.

35% of respondents who have been bullied in the workplace said that a greater amount of confidentiality should have been upheld throughout the handling of the issue. 26% felt that better communication was needed from the company on what constitutes unacceptable behaviour in the workplace.

In addition, while 13% left their jobs because of bullying, a mere 4% raised the issue with HR before doing so. Given the very real impact of workplace bullying on long-term mental health, these figures suggest that not only do HR departments need to overhaul their grievance procedures, but make themselves much more approachable too.

The survey also attempted to find out how companies can improve their response to bullying. Up to 46% of employees surveyed said they would not report bullying behaviour with either the HR department or senior management, and 33% would rather take it up with the bully directly than raise it with HR. This shows that bullying is not taken seriously enough in the eyes of employees, and that HR teams should better encourage the reporting of bullying behaviour when it is observed.

“The findings of our bullying in the workplace survey show that bullying is still very much present in UK companies, and that it’s having a negative effect on not only the wellbeing of employees, but also their productivity.

Employers need to deal with bullying in the workplace in lockdown in the same way that they would if we were not in lockdown. Ensuring there is an open line of communication between employees and HR will be crucial to ensure cases of bullying at work don’t go unnoticed at this time. Simple things such as a weekly company email newsletter with reminders of the correct and anonymous channels where bullying can be reported can help to send a message of openness to the team. This can be the difference between an incident being reported by a victim of bullying or not. Employers should continue to investigate complaints thoroughly and consider disciplinary action where necessary.”

Karen Kwong, Director of Renoc Consulting and an organisational Psychologist and wellbeing coach, comments on the findings:

“Bullying can be extremely damaging for an employee.  On an individual level, they are likely to lose motivation and confidence in themselves, suffer from severe anxiety and stress which in turn could lead to more serious mental and physical illnesses.  This in turn might lead to their work suffering too, through no fault of their own.  The individual may also start losing faith in the team, the manager and the organisation which is bad for overall morale and the reputation of any firm.  These days things like Glassdoor and social media can very quickly ruin reputations of even the most reputable of businesses.

Procedures are vital, as are ways in which to escalate and report such complaints objectively.  Often, people who have been bullied don’t want to say anything because they fear reprisals – a very real issue. HR is often powerless to do much if the bully is a powerful decision maker or money maker in the organisation.  This is why to me, it should start from the top, the culture should be one of respect cascading all the way down to all levels.  Then it is less likely to happen.  And if it does, it will be swiftly and effectively handled in a fair and objective manner.” 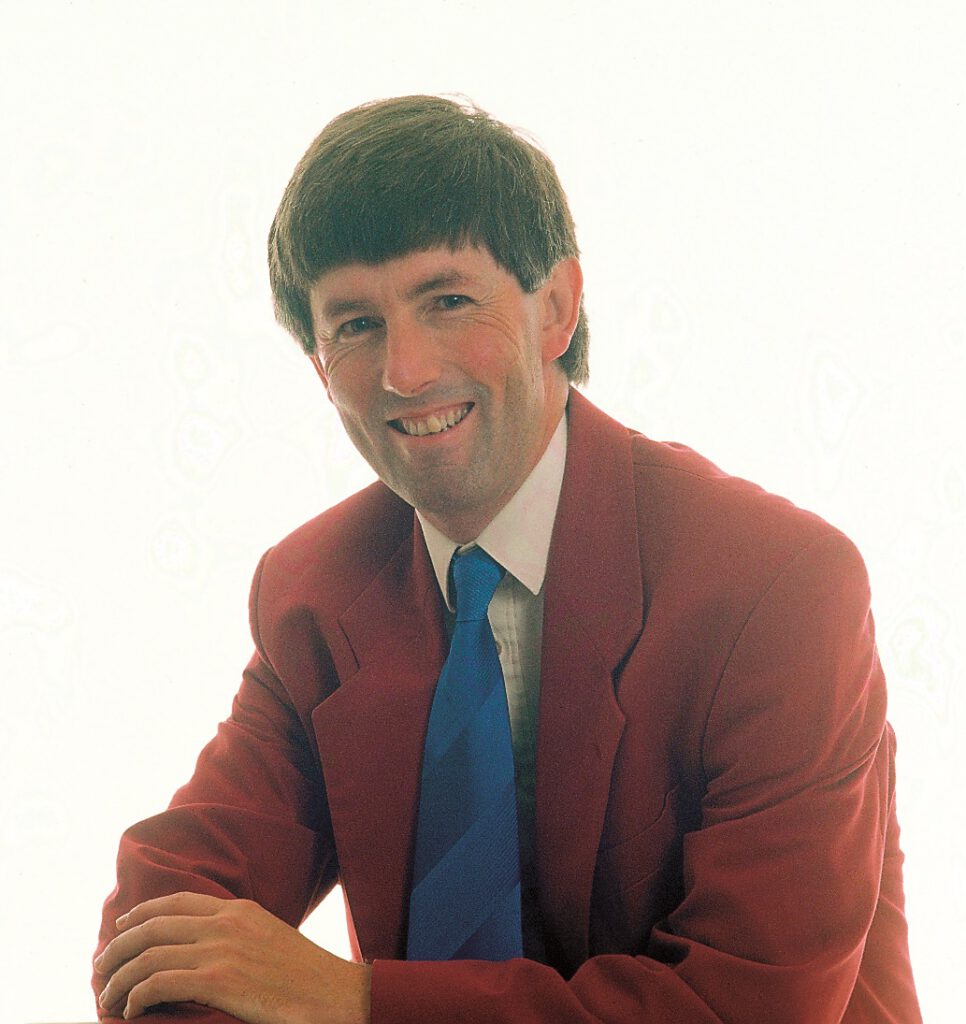 The Impact of Bullying Report produced by distance learning provider, Oxford Open Learning Trust reveals that over a third (35%) of women who were bullied… 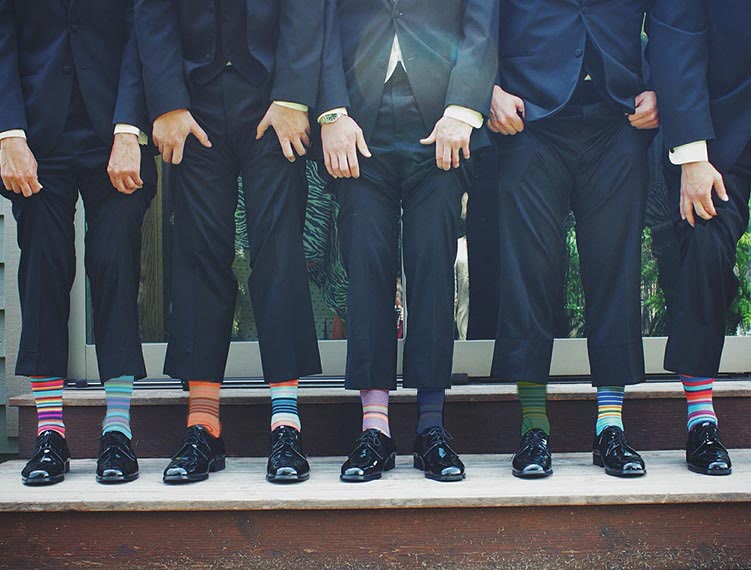 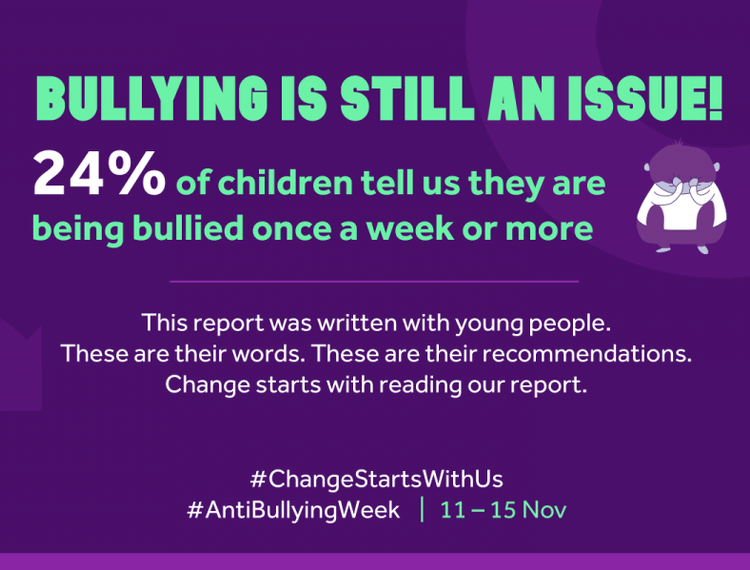 The report titled #ChangeStartsWithUs and published by the Anti-Bullying Alliance with support from O2, includes action that they would like to see tech companies, government,…