Home » Skills and apprenticeships » Underrepresented Groups Participating in HE

However, these figures show us that the rate of change is too incremental. We need a step-change in progress to ensure that everyone with the talent to benefit from higher education has the opportunity to do so, whatever their background. At the moment, talent is being wasted on an industrial scale – with people that could excel in higher education still being held back by where they come from.

Universities and colleges have done well to widen access to higher education, but now it is time for them – under the regulation of the new Office for Students – to seize the opportunity to make changes which will benefit a whole generation.

I am encouraged to see a record proportion of university entrants now coming from state schools and disadvantaged areas. Many universities are already doing brilliant work to ensure more young people go on to higher education, and I would encourage this best practice to be shared across the sector.

Of course there is still more to do. That is why we have introduced major reforms through the Higher Education and Research Act, including the Transparency Duty which will require all universities to publish data broken down by gender, ethnicity and socio-economic background, shining a light on institutions that need to do more to widen access.

See the statistics on widening participation of underrepresented groups here.

Commenting on the non-continuation performance indicators for higher education that have been published today [Thursday 8 March 2018] by the Higher Education Statistics Agency, which… 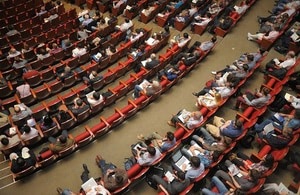 Damian Hinds is calling on universities to tackle high rates of students dropping out as new figures are published today (8 Mar). Universities must do…