In our last Shedding Light on the Labour Market of 2020, we’re going to look at one of the most striking consequences to have occurred through the imposition of Lockdown – that of working from home.

The data tells us two things:

1. Significant numbers of people in higher skill jobs were already working from home

Firstly, even in 2019, there were significant numbers of people in higher skill jobs (1-3 digit Standard Occupation Classification (SOC) codes) saying they had worked from home in the week prior to the survey.

2. Huge rise in the numbers working from home in April this year

Secondly, and more significantly, there was a huge rise in the numbers working from home in April this year, with over two-thirds of those employed as Managers, Directors and Senior officials, and Professional occupations saying they had worked from home the previous week (note: there is insufficient data on Elementary occupations for April 2020, so this has been left blank):

We can also look at ongoing demand for remote working throughout this year. Our Job Posting Analytics data is able to filter out employer postings that mention “work from home” or “can be worked remotely”, which means that we can compare these to postings that do not mention working remotely.

Although non-remote job postings still make up by far the bulk of all postings, when we look at proportionate growth throughout this year we see that demand for jobs that can be done remotely has risen by over 212%, whilst demand for non-remote jobs has risen by just 2.3%, after declining through much of the year:

Which occupations have seen the biggest change?

Next, we can take a high level look at which occupations have seen the biggest change in employer demand since the start of the year, and here we see that in all nine 1-digit SOC occupations, proportionate growth in demand for remote workers has outstripped that of non-remote workers, and that this growth has been particularly striking in the last couple of months:

Which specific remote job titles have seen the most demand?

Finally, we can also delve down much further to look at which specific remote job titles have seen the most demand this year. The following chart shows cumulative postings throughout the year for jobs that can be done remotely, and as you can see it is dominated by a number of IT-related roles, such as Front-End Developers, Web Developers and Remote Developers.

However, there are also a number of other jobs for which demand grew noticeably as the year went on.

For instance, there were less than 100 postings in the first quarter 1 for Business Representatives, yet by the end of November there had been over 5,000, putting this job in 13th position on the chart. Customer Service Representatives also grew massively during the year.

Although it didn’t make it into the Top 20 remote jobs being demanded by employers in the first quarter, with 1,307 postings, by the end of November it was second having had 14,193 job postings throughout the year.

It is clear that when whole industries shut down from March to June, and with the numerous other disruptions continuing to a greater or lesser extent in certain parts of the country, not only did many people — particularly in higher skilled jobs — work from home, but the trend of employers seeking remote workers has grown throughout the year.

Time will tell if this is to be a short-term phenomenon, or the start of a longer-term trend.

Shedding Light on the Labour Market will be back on 13th January. In the meantime, we wish you a very merry Christmas on behalf of Emsi and FE News!

If you would like to find out more about trends in employer demand for your area, contact Emsi for more info.

We hear a lot about the growing demand for digital jobs and skills, but we rarely get past the headlines into the details of what…

In today’s Shedding Light on the Labour Market, we take a look at how employer skills demand has changed over the last year. The chart… 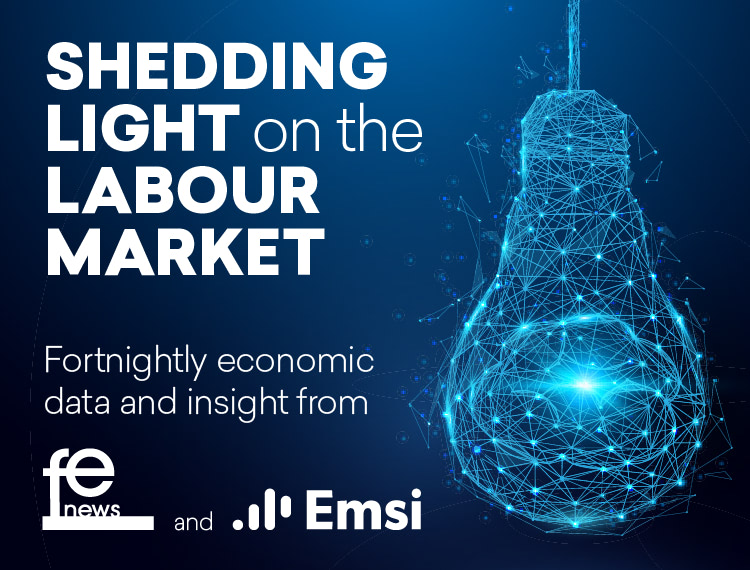 In this week’s Shedding Light on the Labour Market, we take a look at the changing demand for occupations over the last year, and in…

In this piece, @EMSI_UK take a look at how employer demand for occupations has changed over the last 12 months, with particular focus on the…

The recent Post-16 White Paper – Skills for Jobs – places significant emphasis on higher technical skills (levels 4 and 5), with plans for reform, including…