HighWire, the technology partner of choice for leading commercial and scholarly publishers, has become the first systems supplier to roll out the new ‘Universal Campus Activated Subscriber Access’ service (Universal CASA) in cooperation with Google Scholar.

All content published through HighWire’s Intelligent Publishing Platform will be compatible with Universal CASA – meaning researchers can access the content any time, anywhere, from any device and any source.

Traditionally, researchers were limited to accessing scholarly content on-campus, meaning their workflow was restrictive and productivity was limited. The introduction of CASA functionality by Google Scholar and publishing systems suppliers last year was the first step in addressing that challenge, allowing researchers to access subscribed content remotely and on mobile devices, in the same way they would on-campus.

As the workflows and processes of researchers continue to evolve, the rollout of Universal CASA addresses the next key problem: scholars start their research journeys from a variety of different places. These can range from a journal’s homepage or search engines such as PubMed or Google Web Search, social media feeds and email alerts. And prior to the introduction of Universal CASA, these journeys did not have easy pathways to legitimate, accessible content available off-campus.

Anurag Acharya, co-creator of Google Scholar, explains: “The initial rollout of CASA has been hugely successful – because, quite simply, it just works. For the first time researchers could start a literature survey on campus and resume where they left off once they were home, or travelling, with no hoops to jump through. Universal CASA builds on that success by making it effortless for researchers to access content, no matter where the journey begins.

“At HighWire we have always aimed to extend the reach, impact, and exchange of knowledge and ideas. And as researchers become increasingly mobile, seamless access will become the new normal. Last year, around three quarters of U.S. and U.K. adults used the internet ‘on the go’ – and I would estimate researchers carry out as much as a third of their work away from campus.

“Google has noted that the use of CASA rises on the weekends, so it’s likely that those “out of office” hours in the evenings and the weekends are literature-study times for many scholars. That’s why we’re so proud to be the first systems supplier rolling out Universal CASA, making our clients’ content available to scholars any time, anywhere, from any device and any source.

“Whether it’s an email from a colleague, a blog post, a Google search, a Tweet or elsewhere. researchers can then click through to legitimate, authorized content, without using Sci-Hub as a work around to off-campus barriers.”

Universal CASA introduces a new, small badge to let the reader know they have access to a specific article. This badge will display on each article page and will include a help link that will allow users to learn more about or to remove CASA based links.

In addition to CASA and Universal CASA, over the last year, HighWire and Google also rolled out their Quick Abstract innovation, which optimises mobile Google Scholar to speed up mobile research workflow by loading article abstracts at fast speeds so that researchers can quickly scan, swipe and discover the correct scholarly resource remotely and on the go.

“ An innovative project funded by European Social Funding (ESF), aiming to provide educational support for students with alcohol problems has had encouraging result in…

The @AllenInstitute for #ArtificialIntelligence and @OpenAthens today (27 Apr) announce a joint partnership to add a new institutional login option on Semantic Scholar, creating a seamless…

HighWire has been acquired by MPS Limited (MPS).  This transaction brings together two industry-leading and highly-respected organizations that have defined the modern scholarly publishing segment globally. HighWire…

Manuscript Submissions are the lifeblood of scholarly publishing. Building on HighWire’s experience of supporting larger publishers with their submission and publishing workflow management, HighWire has… 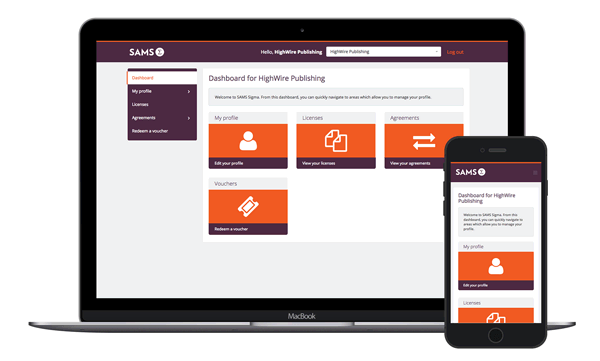 Consumers can register and onboard in seconds, with the launch today of HighWire’s SAMS Sigma identity management application. SAMS Sigma is a customisable self-service platform…