Nine apprentices from the United Kingdom Atomic Energy Authority (UKAEA) have been named the country’s apprentice team of the year, following a testing five-month Challenge that saw them compete against teams from the country’s leading apprentice employers and training providers.

The team, made up of apprentices from Culham Science Centre, near Oxford, battled off tough competition from seven other teams after proving their logistical, team building and communications skills and delivering a community project that involved volunteering with the Helen and Douglas House Hospice and taking part in a £35,000 fundraising drive.

The Logistical and Teambuilding Finale held at Brathay Trust’s headquarters tested the teams individual and group strength, both mentally and physically, and developed their leadership, team building and communication skills.

The eight finalists were selected from 80 teams and 700 apprentices who entered the Challenge. Since February, the teams have worked hard to spread the word about apprenticeships and have visited nearly 400 schools, careers fairs and youth groups to encourage young people to consider an apprenticeship.  The apprentice teams have also reached out to their local communities and delivered 45 community projects to benefit young people.

“We are ecstatic to have won the title of ‘apprentice team of the year’ title. The whole team has worked really hard, not only in the last few days but throughout the whole Challenge – and we’ve had huge support from our colleagues, our families and friends.

“We hope that winning the title will support our efforts to inspire young people and promote apprenticeships. Hard work, determination and self-confidence are key in success. We also hope that young people can use our journey as an inspiration for themselves.”

“What an achievement for UKAEA to be crowned apprentice team of the year.  UKAEA have shown how getting stuck in and learning on the job gives you the skills to achieve great things.

“Well done to all the participants for taking part in the Brathay Apprentice Challenge, they have been worthy ambassadors. I hope their hard work in going out into the community and showcasing the opportunities an apprenticeship offers has inspired more young people to see an apprenticeship as their fast-track to a top career.”

“UKAEA are a great example of how offering an enhanced apprenticeship experience can benefit both apprentices and their organisations. All of the apprentices that have taken part this year have gained teambuilding, leadership, logistical and communication skills.  It has been a pleasure to host the Brathay Apprentice Challenge and watch these apprentices develop into outstanding employees with a national audience.

“With the huge amount of participants this year, the country’s employers are proving they are committed to apprenticeships and their apprentices.”

Employers of all sizes and training providers are being urged to enter their apprentices in the search for the apprentice team of the year. Now… 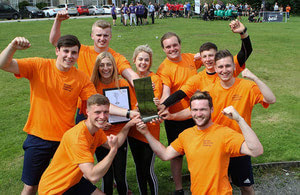 Employers and training providers challenged to see if their apprentices are the best in England The deadline to enter the Brathay Apprentice Challenge (#BAC17), the…