The working of the Local Enterprise Partnerships (LEP), Councils and Colleges all came to the forefront this week as Weston College attempted to put a bid forward to advance the skills agenda for the West of England in particular, but from my perspective the whole of the South West. How was that? I hear you say. Well let’s just look at what was involved…

After the summer break last year the West of England LEP invited bids to support the skills priorities across the region they serve. As a result the College decided to submit a bid (one of two) to develop a Centre for Legal and Professional Services. It was actually a concept brought to us by employers but also one that has much synergy with the aims and objectives of the LEP. We therefore submitted a bid to encompass this area of work, and it progressed from an outline bid to one that was significantly enhanced and also has to involve significant feedback from business and industry.

The demands from the LEP were significant but appropriate to the situation. As with all systems there was bureaucracy but ultimately I was impressed by the LEP’s response, their ability to identify the key facets of a project and also their interest. Eventually, after much deliberation and to-ing and fro-ing, we came up with a bid outline that appeared to meet all the criteria with solutions that included both new build and refurbishment. We also consulted with our local council – North Somerset Council. I firmly believe that the way ahead is about partnership, and colleges that attempt to do it alone in the current economic agenda are both naïve and playing with fire. Equally, it is important to clarify areas of responsibility and if I had to do this again I would be more explicit on terms of reference for responsibility.

The discussions with the council were interesting and it was suggested that the college consider the iconic building of the Winter Gardens in Weston-super-Mare as an ideal location. The Governing Body expressed some concern but overall subject to the LEP criteria of heads of terms for purchase etc. it did seem a potential solution. This is where partnership comes into play because it met the College’s aspirations but it also presented an opportunity to refurbish and enhance the existing building allowing community use. We therefore submitted the bid and met with the LEP on occasions to explain or clarify certain points within our bid.

I suppose as well that we were also concerned that the project had to be ‘shovel ready’ by 1st April 2015. The project would also involve alterations to other parts of our premises so we believed we could meet the 1st April criteria. At the same time North Somerset Council met with us to discuss further stages of development, and architectural plans for further advancement were produced. I should make it clear however that these were purely artistic impressions and that our bid was limited to the existing footprint of the Winter Gardens. It was also quite a difficult negotiation from a match funding/further investment perspective. The council had simultaneously arranged visits to Kent where a similar approach has been achieved through community partnership.

So on Tuesday 13th January the College had to attend a meeting of the council where the project was debated extensively. I followed a speaker from the local Civic Society who provided a very balanced set of responses, in the main geared towards better understanding of process and consultation. I then made my response essentially around the potential for the future. Many councillors spoke on the issue and were rigorous on their support or lack of support for the development. I sat back and watched the proceedings but in fairness it seemed that the majority wanted the project to happen but equally wanted improved communication and consultation. Members of the public were also present and in the main their arguments were on the same theme but certainly were of demonstrable vigour. In the end I think nearly all of those present voiced in favour of the concept. Some people moaned about the level of debate – on the contrary I believe it correct that all arguments are understood and allowed to take place.

So what next? Well the College will await the precise details from the LEP. There is press out there saying we have “bought the Winter Gardens for a pound” – a sum of money to record the transaction is of course needed but the level of investment on top will be in excess of £10m. Hardly a pound in real terms and definitely a building that should only be used for education and leisure reflecting a commitment to preserve and enhance community resources.

For me what was important here was a project that involved Council, College and LEP. We will obviously need to await the precise detail from the LEP, consider covenants and planning permission but that is standard practice which will involve appropriate consultation. From the Chair of the LEP downwards the validity of the service has been well recognised. ‘Management of change’ has been effected without doubt resulting in both positive, negative and ill-informed comments.

For me this was a demonstrable partnership that has the capacity to bring about results that could be massive for the town and the skills agenda. Most importantly if it can advance the skills agenda and help the restoration and upkeep of an iconic building it will be a win-win.

Do I think we should communicate? The answer is yes but only when we know that magnitude of investment from LEP, Council and College and can show what might be achieved. Time to look forward I feel. 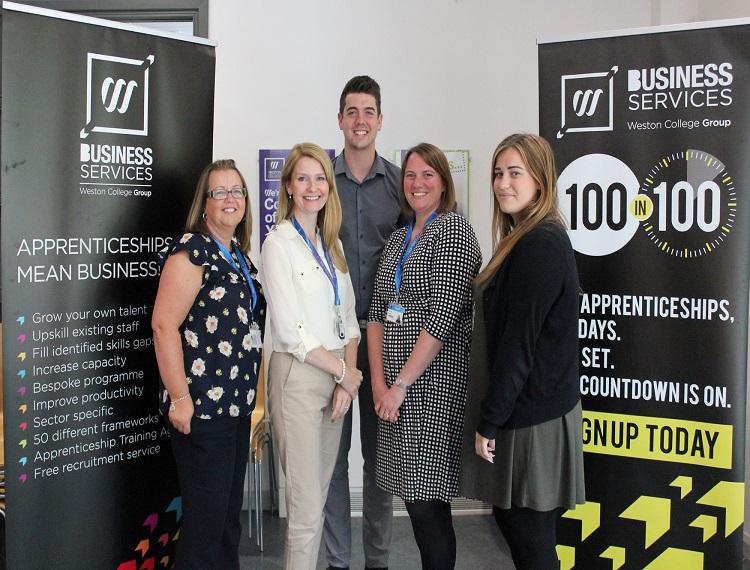 Weston College has received 345 apprenticeship pledges from employers in just 100 days. The College launched ‘100 in 100’, a campaign to promote apprenticeships, with…

To use the word innovation at a time when funding cuts, area review and general disarray surrounds us seems almost a contradiction. Nevertheless at my…