Following an Opening Address by the Principal, Sarbdip Noonan in which guests were told that the evening is all about achievement and inspiration. Sarbdip thanked everyone for taking time out to   attend and spoke of how great it is to witness the transformation of students from enrolment, on through their studies, and thereafter to university and careers. These young people become well placed to contribute to the economy and gain the skills and knowledge to succeed locally and nationally and this is also a credit to their teachers. Award winners were asked to continue to act as ambassadors and return to let the College know how they do as the years proceed.

Sarbdip then spoke of the two Guests of Honour present. The College’s new Chair of the Board of Governors, Gideon Schulman who joined in 2017. He had contributed considerably to the Resources Committee and was subsequently appointed Chair in July 2019. Gideon, a successful businessman, made time to contribute to society and the local area.

Sarbdip informed attendees that the College was privileged to have The Right Honourable Stuart   Lawrence present at the evening. Stuart is the younger brother of Stephen Lawrence and a key figure in the Stephen Lawrence Charitable Trust since it was   established 20 years ago five years after Stephen was tragically taken from his family. The trust has made a significant impact on many young peoples’ lives giving them a positive future. Stuart and his family have campaigned for a fairer and kinder world and they are an inspiration to everyone. Stuart had held a teaching career for over 15 years and now devotes considerable time to giving people a better understanding of topics that some might struggle to deal with.

Gideon took the stage and spoke of the governors being a group of volunteers who set the priorities for the College. Being Chair was hard work and did not get you discounts! He had volunteered because, “when you believe something is worth investing in, you have to give it your all”. The Chair thanked College staff and management and congratulated the award winners. He spoke of having had the good fortune to have met Stuart’s parents during the 1990’s when he was a student and the inspiration they conveyed.

Nicola Conibear, Vice Principal (Curriculum and Quality) briefed attendees on the format of the Awards’ Ceremony before handing over to Harriet D’Cruz, Head of School for Childcare, Health & Social Care and English (CHE). Lights were dimmed and, following a short video, lighting resumed as Harriet announced the award winners from her School after which they proudly went on stage to be congratulated and receive their certificates from the Principal. The former students stood proudly for a photograph and applause before leaving the stage.

Next up was Vik Seeborun, Head of School for Science, Technology, Engineering and Maths (STEM) whose alumni enjoyed a similar experience as above and, the third School; Business, Sport, Creative Arts and Media (BSCAM) was introduced by its Head of School, Stephanie Chittenden after which the Principal welcomed Stuart Lawrence to the stage.

Stuart instantly related to the awards’ winners telling them that though some of them they may have felt awkward standing for a group photograph as they had before so many guests, they would look back on this one day with positive memories for having done it.

Nicola Conibear, Vice Principal (Curriculum and Quality) briefed attendees on the format of the Awards’ Ceremony before handing over to Harriet D’Cruz, Head of School for Childcare, Health & Social Care and English (CHE).

Lights were dimmed and, following a short video during which teachers spoke of their fond   memories of the former students, lighting resumed as Harriet announced the award winners from her School after which they proudly went on stage to receive their certificates from the Principal. A group photograph ensued and applause before leaving the stage.

Award winner and former Health and Social Care student, Shymaal Mehta, told us he felt excited meeting his old teachers and classmates. Staff had been so helpful and supportive during his time at College. He commented that the Awards’ Event was informative and well structured. Shymaal had progressed to study Psychology at Brunel University.

Next up was Vik Seeborun, Head of School for Science, Technology, Engineering and Maths (STEM) whose awarding winning alumni enjoyed a similar experience as above. Former student, David Puha said it was nice coming back to Stanmore, he had greatly enjoyed the videos shown at the Awards’ Event. David told us he had gone on to study Computer Science at University.

The School of Business, Sport, Creative Arts and Media (BSCAM) was introduced by Head of School, Stephanie Chittenden, who read out the names of the winners inviting each one to the stage to receive their award. The Principal then welcomed Stuart Lawrence to the stage.

Thank you @StanmoreCollege for allow me to speak to the prize winners and to give out those special awards it was great looking forward to next years #Keynote #Awards #Students #YoungPeople #NextStep pic.twitter.com/RkCtVGO9qR

Stuart instantly related to the award winners telling them that, though some may have felt awkward standing for a photograph, they would look back one day feeling glad that they had done so.

He encouraged students to continue to do their best in life and was keen to emphasise that “hard work beats talent when talent doesn’t work hard”.

Guests were treated to a presentation in which Stuart shared information about his life to date and positive thoughts and questions to contemplate.

Main points included “Success – what does it look like? Family, happiness, time, money, football” the things he had found important in his life – “with great power comes great responsibility”. He referred to Selflessness; we live in a world where lots of people think only about themselves. What about others? There are people out there not as fortunate as us.

Stuart spoke of being givers – not takers, and enabling someone else to do well; he encouraged guests to give back; even small kindnesses make a difference.

The Special Awards were announced and Stuart welcomed the winners to the stage.

The evening closed with the Principal, Sarbdip   echoing the main message of the evening; education is something no one can take away from you. Students were encouraged to break barriers and follow their dreams. Smiles abounded as balloons were released from a pre-assembled ceiling net while guests left the hall to enjoy refreshments and mingle.

Former Media student and winner, Henry Zhang, now studying at London College of Communication, expressed surprise at having won an award. Henry had enjoyed the facilities and equipment at College and said listening to Stuart Lawrence had been the highlight of his evening. 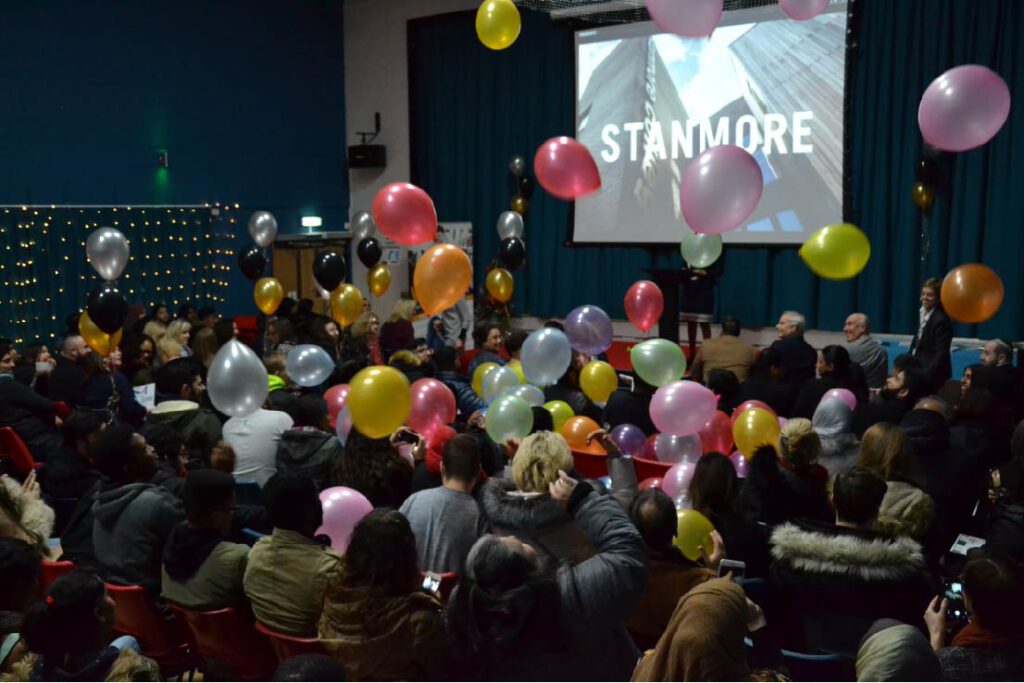 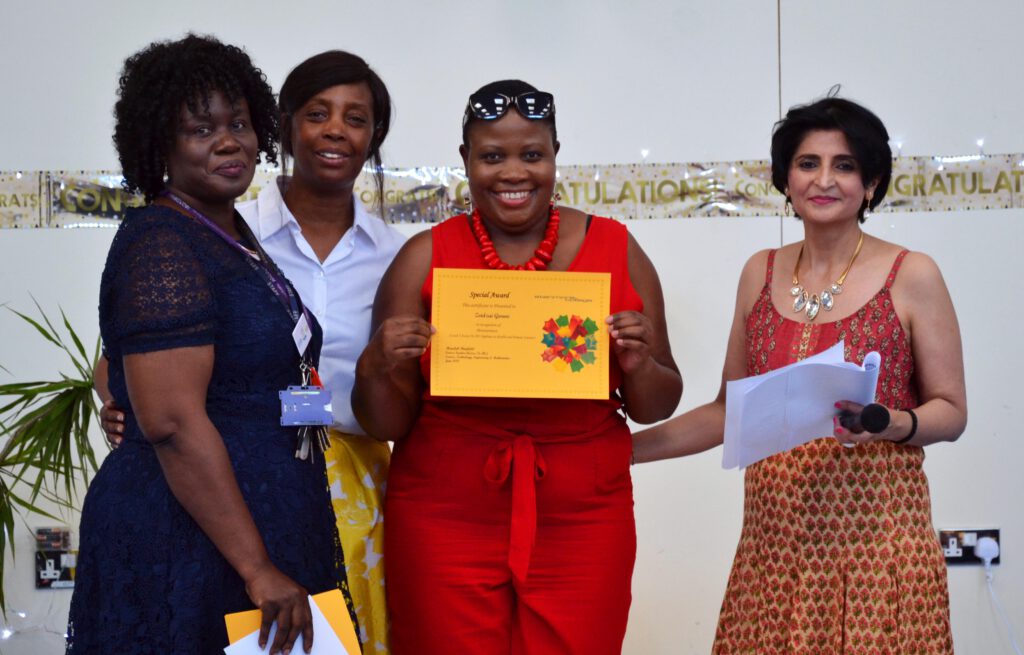 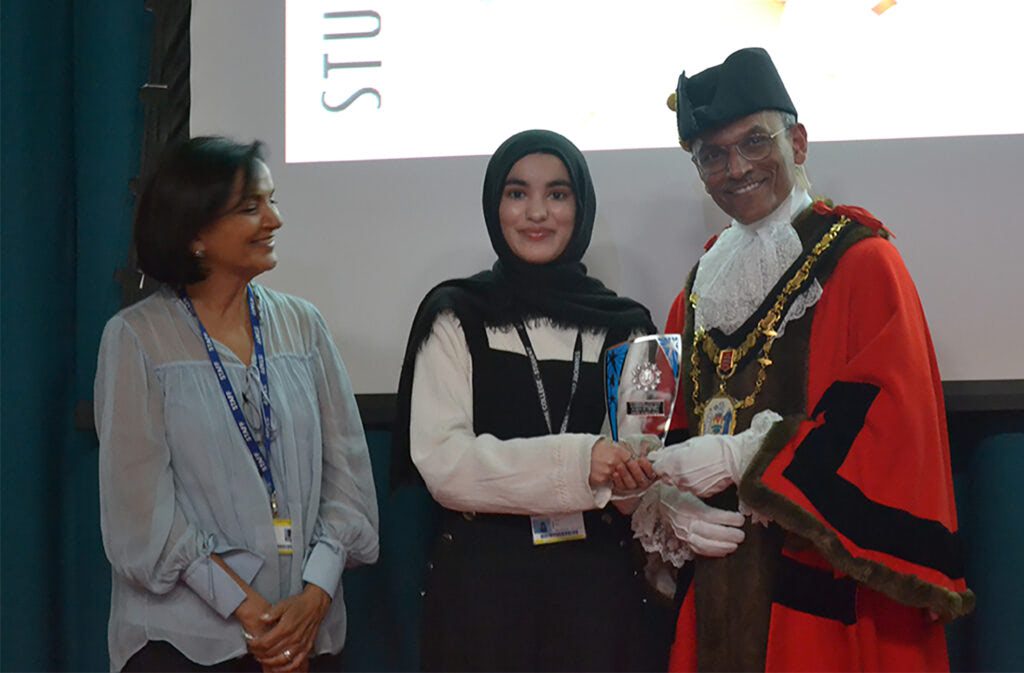 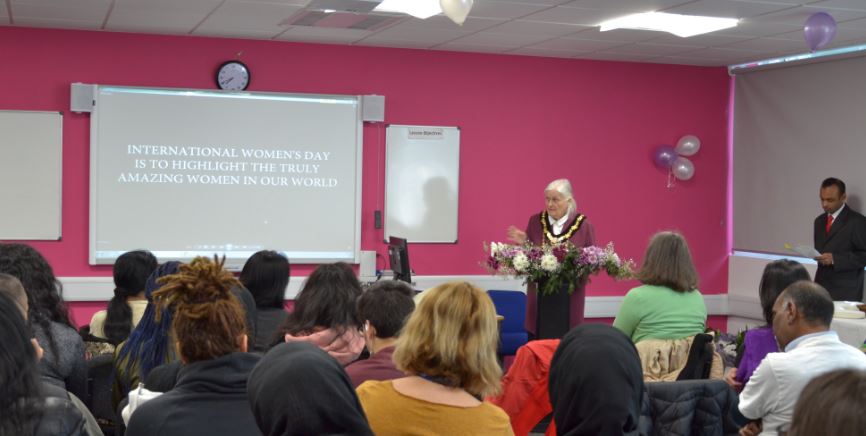 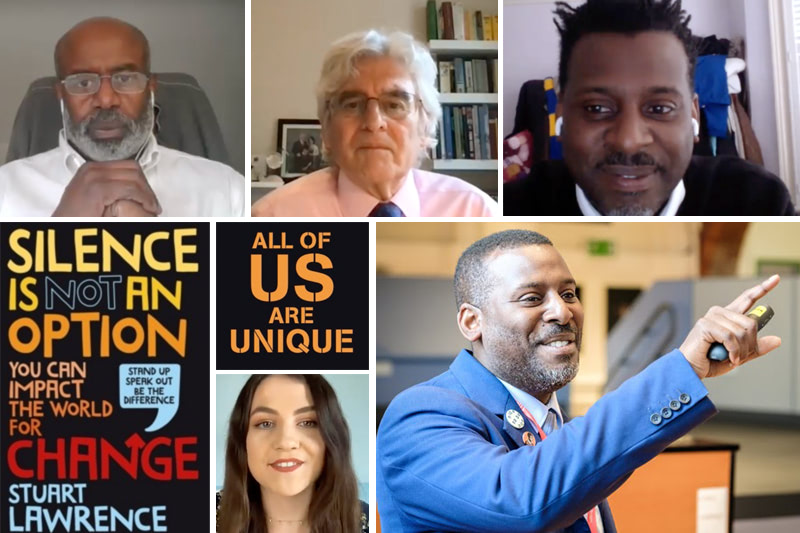