Secondary school league tables continue to misrepresent the performance of schools by failing to show the difference when pupil background is taken into account, according to the Fair Secondary School Index published by the Northern Powerhouse Partnership today [29 October].

As the deadline for secondary school applications closes this week, latest research from the University of Bristol shows that once factors such as pupil ethnicity, deprivation and special educational needs are taken into account, a fifth of schools saw their national league table position change by over 500 places.

Critically, more than half [51%] of schools across England currently judged to be ‘underperforming’ would no longer fall into this category. These are the striking findings from the latest study by Dr George Leckie and Professor Harvey Goldstein from the Centre for Multilevel Modelling at the University of Bristol who analysed the 2018 data from all 3,165 state-maintained secondary schools in England.

They looked at ‘Progress 8’, the headline measure used by the Department of Education to assess progress made by pupils during their time at secondary school. It was introduced in 2016 and compares GCSE results to Key Stage 2 test results, which the Government argues takes prior attainment into account when judging progress.

The findings are consistent with previous research published by the Northern Powerhouse Partnership from Education Data Lab which showed many working-class girls and boys from less well-off homes and groups including those from white ethnic backgrounds do worse overall currently.

According to the Fair Secondary School Index, Dixons Trinity Academy in Bradford is the best school in England.

It is a significant achievement that schools with high proportions of children from long term disadvantaged backgrounds, identified by previous Education Data Lab research, are among the highest performing, with two in the North achieving top ten positions in the national rankings in the Fair Secondary School Index. These include Kingswood Academy in Hull (up 158 places from its ranking under Progress 8 to 7th) and Ormiston Chadwick Academy in Halton (up 119 places to 8th).

“The League Tables and data that we use to judge schools are often more a measure of the school’s intake than the quality of teaching, learning and real progress being made in that school. Indeed, Ofsted themselves often reward these same measures, and therefore a school’s intake, when giving their judgements as headteachers and others have warned.

“This independent Fair Secondary School Index uses much more detailed data and analysis to arrive at fairer and deeper understandings of what makes a good school, often turning League Table standings on their heads. We can see from this that some schools operating in the most challenging contexts are doing an outstanding job. Other schools that may have previously escaped scrutiny actually require support.

This is ground-breaking work by the Norther Powerhouse Partnership with Bristol University and I hope it is taken up wholeheartedly by the Department for Education, Ofsted and all those working on improving schools.

“The government hasn’t had a consistent focus on improving education standards in the Northern Powerhouse.

Unless we devolve more powers and funding, establishing a new Northern Schools Board to oversee currently unaccountable Schools Commissioners and a centre for what works in schools in disadvantaged areas, we will not be able to close the skills gap even with much more devolution and increased funding for Further Education to our Metro Mayors and combined authorities.

“Following the publication of this Index, the Northern Powerhouse Partnership  will make recommendations to all parties on what must be done to deal with the underlying causes including in the early years of the disadvantage gap, with commitments for funding education needing to include at least £1 billion each year for five years to support the long term disadvantaged in the North in particular. That must be our priority if we are to close the North-South economic divide, alongside investing in transformational transport infrastructure for instance.”

“We want all pupils to fulfil their potential, regardless of their background, and we introduced Progress 8 to provide a fairer measure on how schools are supporting pupils to achieve their best.

“Progress 8 helps parents choose the right school for their child, specifically recognising those schools that make good progress with lower attaining pupils, and identifying those schools not doing enough with a high performing intake.

We do not put schools into league tables. We publish a wide range of performance data – including Progress 8 scores and what pupils go on to do after school or college – to help parents decide on a school for their children and for schools to measure their performance.

“We publish a raft of additional information on the performance tables website, including performance against the headline measures for different characteristic groups, such as disadvantaged pupils. This enables parents, and those working with schools, to view a school’s results alongside information about its cohort.

“Progress 8 takes prior attainment into account and rewards schools for the progress made by all their pupils, not just those at particular grade thresholds.

“We no longer publish or use the floor or coasting standards, and instead use a new single, transparent method for identifying schools eligible for improvement support – Ofsted Requires Improvement. This is an important step in creating a clearer, simpler accountability system – helping to reduce undue pressure on school leaders, which can lead to excessive workload that distracts teachers from teaching.” 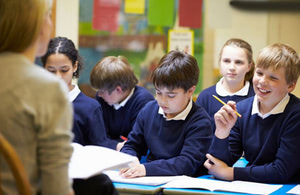 The achievements of pupils at key stage 4, and how they compare with other schools in their local authority area and in England. Documents Secondary…

The achievements of pupils at key stage 4, and how they compare with other schools in their local authority area and in England. Documents Secondary…